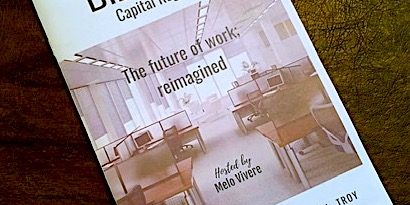 I stumbled upon DisruptHR about a year ago. I went to the site to research speaking opportunities; and like a beacon in the night, the link “Organize a DisruptHR event” appeared. My first thought was to ignore it but my eyes kept going back. “How tough could it be?”, I thought. “I throw dinner parties”. So, I clicked it.

After talking with Jennifer McClure and becoming the official organizer of the Capital Region, I spent the next 6 months panicking. What if the Capital Region didn’t want to be disrupted as much as I think they should? What if I can’t get any speakers? What if no one shows up? How do I get sponsors? One good thing about having a contractually binding agreement is that it gives someone who loves ideas a deadline. So I planned, organized, and executed. I also learned some things along the way.

#1: Keep your vision- People have opinions and feedback and some are shared unsolicited. It can be easy to be swayed. It was important to remind myself of my vision so that the decisions made were in support of that. Did I make some compromises? Of course! Did I always want to? No. Finding a balance between the two was important but standing up for my idea and being true to myself was even more so. I like to say I am a reformed people-pleaser and wanting to make others happy is easy. Saying, “no, that’s not how I want it done” takes practice. In the end, it’s oh so worth it.

#2: It’s ok to pivot and redefine your mini-goals- I had grand plans and all were not able to be executed. Moments were frustrating because not everything went the way I had hoped. In one of those moments, I told myself “well, you’ll just have to redefine it.” Pivoting does not mean giving up; redefining isn’t failing. Sometimes we have to take a detour to get to our destination but it doesn’t mean we’re not still moving. And sometimes the detour takes us in a better direction and adds another route on our map that we can refer to down the road.

#3: As George Michael said, “you gotta have faith”- During the planning there were times of silence. In those moments it was easy to get anxious. Did my email fall into a black hole? Are they still planning on speaking? Does a verbal agreement over wine count? I realized one day that if I was going to do this, I had to stop worrying and have faith. I had to believe the verbal agreements (which threw me at first) were solid. I had to believe the venue would not get double-booked, the videographer would show up, and the speakers were working hard. I had to have faith that God would provide everything I needed when I needed it. I had to believe the saying, “focus on the what and why; the how will take care of itself”. It’s not always easy especially when you know that the brain makes things up when it has no context but in the end I really believed this was exactly where I was supposed to be and the faith to know it would all work out.

#4: Family is everything- My brother connected me to Ken, the videographer. My sister welcomed people at the registration table. Both provided guidance behind the scenes. My parents came to support. My mom asked why she was in the program when she hadn’t done anything. I told her because I wouldn’t be able to do any of this without them. They support goals; both practical and impractical. They provide love and refuge. They listen when things aren’t going well and celebrate when they do. No matter what I accomplish, they will always be in the program.

#5: Everything is temporary- Two weeks before the event, my grandmother passed away. She was just 7 weeks shy of her 100th birthday; a constant presence in my life. Her death while not sudden still felt “out of the blue”. We irrationally thought she’d be around forever. It reminded me that whether life is long or short, it’s temporary. So take the chance, stumble and learn, cry in front of strangers and friends, meet new people, share an idea and even if you think no one will care- share it anyway. Celebrate the good experiences but don’t rest on your laurels. Acknowledge the disappointing experiences but don’t get bogged down in frustration. Things are always going to change so embrace it all.

There is a line to a Garth Brooks song that says “Life is not tried it is merely survived if you’re standing outside the fire”. For years, I have said yes to life even if I didn’t know the how. I have tried to jump in the fire and take a chance. Organizing the DisruptHR event was one of these experiences. Many moments I had no idea what I was doing. The next day, I would have a great epiphany that came just in the nick of time. I told myself often “it will all work out”. I found passionate speakers, an amazing venue, a talented videographer and just enough sponsors to make it work. I truly enjoyed the process. Did everything go as planned? No. Would I do things differently next time? Yes. Was it all worth it? Absolutely.

Lynne Rittner is the Founder and Organization Analyst & Strategist for Melo Vivere, LLC in the Capital District of New York. She has over 15 years experience in organizational planning and development most recently working in Boston with start-ups, small businesses and non-profits. She has a background in social work and psychology and is a Certified Practitioner with Herrmann International and the Whole Brain Dominance Instrument. When she is not sparking change, you can find her hanging out with her dog, Lola.

© Lynne Rittner and Melo Vivere, LLC, 2018. Unauthorized use and/or duplication of this material without express and written permission from this site’s author and/or owner is strictly prohibited. Excerpts and links may be used, provided that full and clear credit is given to Lynne Rittner and Melo Vivere, LLC with appropriate and specific direction to the original content.